Raquel Andrade’s research group, which operates within the Biomedical Research Centre (CBMR), studies the Temporal Control of Cell Differentiation in Embryonic Development. Though both scientific and technical advances have been made in recent decades, fundamental gaps still exist in our understanding of how a large number of diseases originate, as well as in the development of effective treatments for these diseases.

Raquel Andrade’s research group, which operates within the Biomedical Research Centre (CBMR), studies the Temporal Control of Cell Differentiation in Embryonic Development. Though both scientific and technical advances have been made in recent decades, fundamental gaps still exist in our understanding of how a large number of diseases originate, as well as in the development of effective treatments for these diseases.

The malformations in question come about as a result of changes in the processes that control the transition from intense cell division to differentiation into specific tissues during embryonic development. At the other end of the scale lie tumorigenic processes, in which adult cells are deregulated to such an extent that they regress, becoming undifferentiated and proliferative (similarly to embryonic cells).

“During the development of an embryo, a single cell resulting from the fusion of an egg and a spermatozoid divides into many daughter cells that will eventually differentiate, giving rise to the multiple specialised cells that make up an organism,” explains the researcher.

Now, “The differentiation of cells into neurons, bone, etc., has to happen at the right time and in the right place, or it may result in congenital malformations,” contextualises Raquel Andrade. “This is the case with spine malformations (such as scoliosis, or spondylocostal dysostosis), which take a significant toll on the health and well-being of individuals affected”, exemplifies the researcher.

But how do cells know when and where they should differentiate to form specific organs? How do embryonic cells measure time and space?

A molecular clock operates in the early stages of embryonic development, involving oscillations in the expression of several genes; in other words, a gene is expressed, and a protein is produced. The protein is then rapidly degraded, and a new cycle begins. These oscillations occur in undifferentiated and proliferating cells and stop when the cell differentiates and finalises its transformation.

Embryonic molecular clock genes are involved in delicately regulating the transition between the proliferative state and cell differentiation. “We use chicken embryos to study this molecular oscillator,” says Raquel Andrade, who goes on to explain that, “If we have a deep understanding of the way in which it functions and is regulated, we can intervene to halt, or even reverse, processes that lead to congenital malformations or tumours”.

The frequencies of molecular clock oscillations vary in different animal models, as well as throughout the development of an organism. “We’re interested in understanding what controls the periodicity of the clock, as well as the role it plays in forming different types of vertebrae along the axial skeleton,” concludes Raquel Andrade.

This research is aligned with the aims of Goal 3 of the 2030 Agenda, as it seeks to contribute to ensuring “quality health” and promoting well-being for all, at all ages. Though the the clarification of the role and regulation of the embryonic molecular clock is currently considered a fundamental area of scientific study, it could, in the future, contribute to resolving health problems in such diverse areas as fertility, cancer and even regenerative medicine. 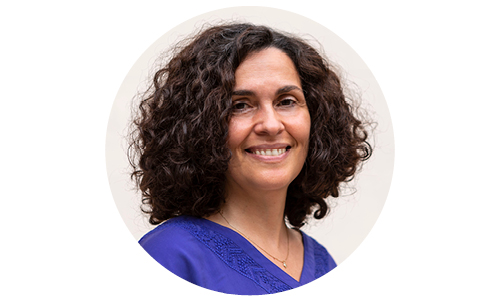 Raquel P. Andrade has a Bachelor’s Degree in Biochemistry a PhD in Science and is a Researcher for the Biomedical Research Centre (CBMR) of the University of Algarve